In addition to being a savings vehicle for retirement, a Roth IRA can also be used as a rainy day/emergency savings fund because of the unique rules that apply to Roth IRAs vs other types of IRAs (e.g., Traditional IRA, SIMPLE IRA and SEP IRA).

You always have access to your Roth IRA funds, with contributions always being tax  and penalty free when distributed.

In May of 2019, the Federal Reserve release their annual survey (it is released each year since 2013), “Report of the Economic Well-Being of U.S. Households,” and found that a large number adults are not prepared to deal with modest unexpected expenses such as the following: 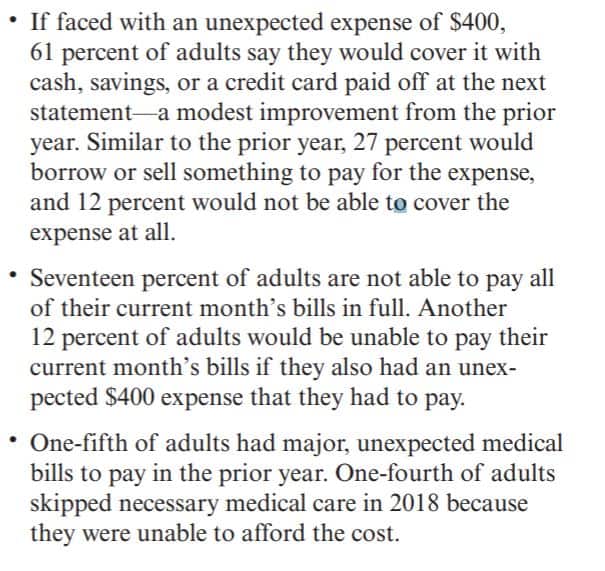 A Roth IRA can also be used to pay unexpected  medical emergency expenses. The above study also found that out-of-pocket spending for health care is a common unexpected expense that can be a substantial hardship for those without a financial cushion. As with the small financial setbacks discussed above, many adults are not financially prepared for health-related costs. During 2018, one-fifth of adults had major, unexpected medical bills to pay, with the median expense between $1,000 and $4,999. Among those with medical expenses, 4 in 10 have unpaid debt from those bills.

In addition to the financial strain of additional debt, 24 percent of adults went without some form of medical care due to an inability to pay, down from 27 percent in 2017 and well below the 32 percent reported in 2013. Dental care was the most frequently skipped treatment (17 percent), followed by visiting a doctor (12 percent) and taking prescription medicines (10 percent).

If you don’t have a Roth IRA then the solo 401k plan may be your next best option to access funds to pay for unexpected expenses. Not everyone qualifies to open a solo 4o1k plan. Solo 401k Eligibility Requirements: In a nutshell you need to be performing at minimum part-time self-employment activity in order to open and continue with the Solo 401(k) plan, and it has to be active income versus passive investment income. One way to distinguish passive income versus active income is that active income is subject to Social Security taxes were as passive income is not because it’s considered capital gains income. Visit Here to learn more about the solo 401k eligibility requirements.  If you qualify for a solo 401k plan, you can then transfer your former employer retirement plan as well as IRAs (except for Roth IRAs) to a solo 401k plan and subsequently take a solo 401k participant loan.