Two or more trades or businesses under common control–related through common ownership interests–make up a controlled group (Treasury Regulation 1.414(c)-2). A controlled group of employers may take any form such as sole proprietorships, partnerships, S-Corporations and C-Corporations, LLC and tax-exempt organizations, or a combination of any of these.

To be considered a brother-sister controlled group, the same five or fewer persons must own, in aggregate, at least 80 percent of each of the organizations in the brother-sister controlled group. Also, the same five or fewer persons who meet the controlling interest requirement must have effective control (ownership of more than 50 percent) of each organization.

1. Which individuals or entities have ownership interest in the business?

2. What, if any, ownership interest does the business have in other businesses?

A controlled group of employers is treated as one employer for Solo 401k eligibility purpose. This means that all employees under that group must be considered for eligibility for the plan. If eligible to participate, all employees (including the owner) must receive plan contributions and therefore a traditional 401k instead of a Solo 401k plan must be opened.

While I know I’m currently eligible to establish a Solo 401k, I’m trying to determine if I will be able to continuing using in a few years given the situation described below.  Does the IRS approve the following situation?
I open a Solo 401k plan for my single-member LLC.  My wife has no ownership of my LLC and does not make contributions to the Solo 401k plan.  Separately, she also has her own LLC that is currently a single-member LLC.  In 2-3 years, she plans to open a law practice and expects to hire full-time W-2 employees. Because she has no ownership in my LLC, did not contribute to the Solo 401k plan and I have no ownership in her LLC (that now has employees), I plan to continue contributing and operating the Solo 401k since I still don’t have any employees in my LLC.
Does the IRS allow this or would the Solo 401k be disqualified simply because of our marriage even though we’ve kept our two businesses separate?

Typically, your spouse’s ownership of the LLC would be attributed to you such that if the other LLC had employees it would prevent you from opening a solo 401(k).  In order to avoid the application of these attribution rules (And assuming that there is no interaction whatsoever such that the affiliated service group rules would not apply), you would not be permitted to have any direct ownership nor even participate in her business. See the discussion of the attribution rules as they applied to controlled groups at the following:
https://www.irs.gov/pub/irs-tege/epchd704.pdf 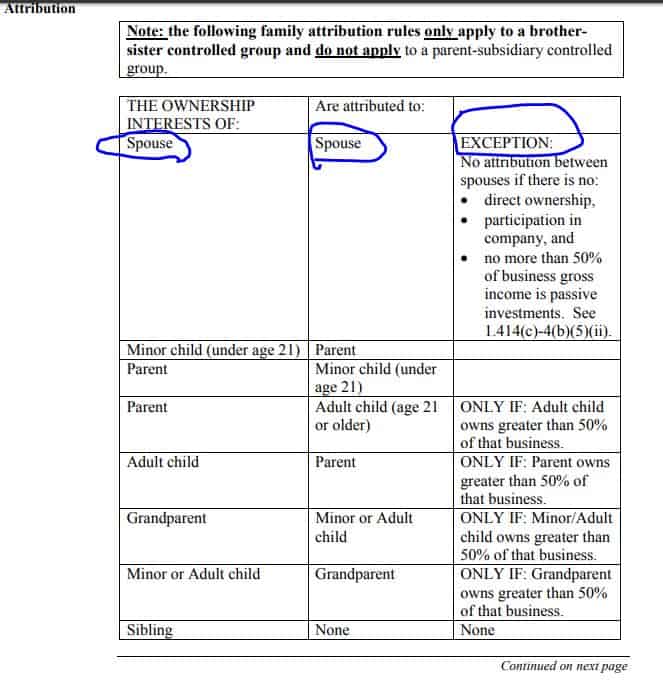 I have been told by my attorney/accountant that I am no longer eligible for a solo 401k and should convert to a safe harbor plan.  The current plan is under my LLC, which is a single member LLC with no employees owned entirely by me.  But my wife is the sole member of another LLC that does have a full-time employee.  I am being told that since we are married the employee would basically be considered mine as well.

While a spouse’s ownership interest in a business is generally attributed to the other spouse, your situation may fall under the exception to the spousal attribution rules.
Please review the attribution rules and chart on page 7-12 at the IRS link listed in the previous question above.

Assuming business 1 and 2 don’t do business with each other, and the wife will no longer own 50% of business 1,   business 2 can sponsor a solo 401k plan but only the wife can participate (not the husband).

Currently one of my self-employed businesses sponsors a solo 401k  which is a S-Corp and I own 100%. My wife is an employee and so the 2 of us are the Solo 401K plan participants. I want to know how much ownership I can have in other/separate businesses (LLCs or S-Corp) without violating any of the rules.

I would think I can have any size ownership as long as there are no employees in any of those other businesses, but what if I own a percentage of one of those entities and there are employees?

Your understanding is correct, as long as the new company does not have any full-time W2 employee. You ownership percentage would not affect your eligibility. However, the income from all your self employment activity would need to be aggregated from a contribution perspective (meaning: if one company reported a gain and the other had losses you would need to net them together).

Can I own 100% if there are any number of employees as long as no employee works more that 1000 hours in a year?

Correct, if you do have employees then each employee needs to work less than 1,000 hours a year.

In order for your self-employed business and the other entity/entities form a controlled group: you, your spouse or another related party such as your mother, father, son or daughter would need to have a combined ownership percentage of less than 80% of the other entity. Therefore, even if the company had full-time W2 employees, the controlled group rules would not impact your Solo 401k as long as you together with related persons do not own 80% or more of such company. Please note that even if there is no impact under the controlled group rules, per the affiliated service group rules if you (or a related person) own less than 80% of a company with full-time w-2 employees & that company is affiliated with your self-employed business which sponsors the Solo 401k (e.g. interacting directly or indirectly, serving the same customers, etc.) the two businesses may constitute an affiliated service group (even though you own less than 80% of the other business with employees) which means that the employees of the other business will be considered employees for purposes of the Solo 401k and you will no longer be able to maintain the Solo 401k.

My husband and I are 61% owners on an S corp with some other family members. We have full-time employees and would like to set up a solo 401k. I understand that the solo is for people who do not have full-time employees. We do however have a property management business that runs airbnb’s my husband and I are the LLC owner-operators of this. I’m thinking if we opened up our solo 401 through this business we would not have much to fund the 401K. Is it possible to take wages earned from the S Corp and put them into the 401K that we opened under the property management company? Thanks for your time and assistance.

You could only open a Solo 401k under the latter entity (LLC) if the ownership in the S-corp with employees held by you and your spouse along with any interest held by your parents and/or kids (if any) was less then 80% and the S-corp had nothing to do with the LLC (and further provided that you don’t have any other business with employees).  Even if you could open a Solo 401k under the LLC, you would not be able to make contributions based on wages earned in the S-corporation.

I have a question regarding my solo 401k account. I have registered another business with same partners as the business I have as “adopting employer” for current plan. Right now I am planning to have businesses active. At some point, I might want to close down the business that is “adopting employer”. What are my options to use same plan for both now and just the new one at some point? The new business will not be generating any money for this year and probably next year too so I am not in a rush.

What is the definition of direct interaction between companies?

The terms are not specifically defined in the regulations or guidance and trying to come up with a proper definition would take too much time (compare: I understand that the person who wrote the first Oxford dictionary is referred to as a “madman”).  It’s best to take a broad approach and analyze each scenario based on the facts and circumstance.

What is the layman’s term definition of affiliated service group?

It is worth noting first of all affiliated service group rules were put in place in response to the market trying to circumvent the controlled group rules.  An example of an affiliated service group would be two companies that although they don’t share common ownership (and therefore don’t constitute a controlled group) still work together to serve the same customers (e.g. a management company that provides management services to another company)